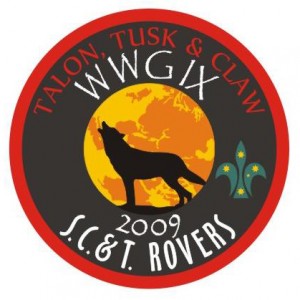 October 24-25 saw the Rovers of the South Coast and Tablelands return to the Cataract orienteering course to host the latest instalment of the Weekend Wide Game: “Talon, Tusk, and Claw”. Inspired by Kipling’sÂ The Jungle Book, 22 Scout Patrols took on the roles of various animal characters – classed as Hunter, Pack, or Prey – and were sent out into the bush to try and survive a deadly drought. The Venturers, Rovers and Leaders took up the roles of Man or Forces of Nature (Earthquake, Disease, Famine, and Flash Flood)

The Hunters were the smallest group and at the top of the food chain, but the wolves of the Pack could band together to challenge them. The Prey animals were doomed to be food and could not defeat either predator, but could form Herds to pool their strength and could still win the day through cunning and superior tactics.

Forces of Nature roamed the jungle, causing harm to all they were able to catch. Given that a large number of them were riding mountain bikes, they presented a serious threat.

Man could be found throughout the game area. Any animal encountering them would randomly encounter one of three people: Buldeo the hunter, Messua the helper, or Toomai the healer – the latter only helping if the correct price was paid. Man did not have it their own way however, with each Hunter having the opportunity to become a Man-Eater. This risky opportunity was taken twice, resulting in a coordinated and resolute hunt for the culprits.

It was truly an interesting weekend. A recent back-burning operation had resulted in certain areas of the Orienteering Course producing very dirty Scouts – although it must be admitted that a large number of these Scouts looked as though the dirt and soot had been added deliberately!

Entrepreneurs abounded – as did conmen and “creative” approaches to the various problems and missions the game presented to the Patrols. Many Patrols displayed unexpected tactics and initiative and succeeded in ways we didn’t expect, often to the frustration (and sometimes respect) of their pursuers. Well done to them all!

When it came to scoring, Patrols were first ranked in their “species”, and a group of finalists chosen. Points were awarded as follows:

These finalists were then ranked across a different set of (common) goals to determine their placing. Of this group, the final positions were awarded as follows:

Winners of the Venturer award were 1st Balgownie.

Thanks go to ALL the Venturers, who made up an impressive contingent. Nearly 40 of them turned up to help run the event, proving that the appealing of hunting Scouts remains as powerful as ever, and that sleep is truly for the weak! The Organisers remain grateful for their assistance, as the WWG could not run without their help.

Recognition must also be made to the other dedicated organisers who helped produce this event: Bob Nightingale, Rob Chincella, Tristan Haider, and Catherine Ruskin. Much appreciated assistance was also received from representatives of nearly every one of the SC&T Rover Crews.

A final special thanks also go to Snowgum, who very generously donated prizes and material to the event.

On behalf of the SC&T Rovers and the WWG Committee, thank you all for coming, and I look forward to seeing you next year.