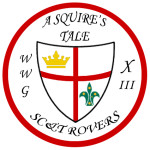 Chaos in the kingdom at the meet of Squires in November. The bait in Arthurâ€™s Trap set.

The Castle Siege, had a medieval castle constructed out of Scaffolding & Hessian.Â  With Archers and Swordsmen protecting the walls and door, Scouts were required to team up with a Warlord of their choosing to attempt to break into the castle. The record for the largest Warlord cavalry was held by Lancelot (Hugh Powell, 1st Figtree Rovers), with over 20 patrols (about 100 scouts) by Saturday afternoon. The service leaders were definitely shocked as his army began to gather in the marshalling point!

To access the Castle Siege, squires were required to pass through the void of random encounters. From monks in distress, to heroic quests, squires would assist where possible, with a chance to be turned on at any point! Several duels took place, along with an insult sword fight against leaders.

A village of Slums, popular for waging a classic stone throwing activity, gave squires the chance to gain some gold, from waging activities, to renting a gold farm for a set time. Those thought to be funny were faced with the challenge of becoming the town crier.

â€œCamelot! The town that never sleeps. It’s Camelot…â€ Who ever thought the Black Knight would train squires on how to yield a sword! Many squires were relieved when he offered training to them this year! Along with training, squires were able to duel one another (or a nominated Service Leader), in Sword fights, jousting and target shooting (with spear guns). Along with the physical options in Camelot, medieval puzzles including Ye Olde Pharmacy and Viking Chess were possible.

But as per medieval times, you werenâ€™t always safe. With Hell Hounds and Sidhe roaming the dark forest, Squires were always on the lookout. Several times, both the Hell Hounds and Sidhe were spotted grouping around Camelot and The Void. They began to attack, attacking anything in their path. With little to no time for Squires to hide, the townshipâ€™s alert system sounded and Squireâ€™s took shelter if it wasnâ€™t too late!

The results for WWG XIII â€“ A Squireâ€™s Tale are below.

The South Coast & Tablelands Weekend Wide Game Committee would once again like to extend a heartfelt â€œthanksâ€ to all the Venturers, Rovers & Leaders who assisted throughout the weekend. An additional thank you to our CaterersÂ â€“ Allan Goodger, Matthew Riley & Peter Perusco, as well as our First Aider Colin Thompson â€“ your assistance is highly appreciative.