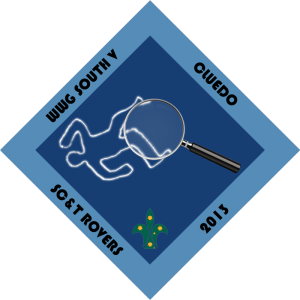 As the mystery was slowly solved, it seemed that the host, C. A. Daver suffered many head wounds and wasnâ€™t highly liked by those at his ‘friendly’ gatheringâ€¦

The Dining Room required Scouts to feed one another over a 3 meter distance, as well as Waiting on Leaders to ensure they werenâ€™t dehydrated over the weekend.

The Kitchen saw Private Investigators translating recipes which had been translated from German, to Japanese and then English again, through to grinding their own wheat to create a meal. Pots, Pans & Knives were thrown to relieve the stress from what seemed to be unsolvable puzzles.

A formal Billiard Room included Giant Billiards and the testing of Private Instigatorâ€™s knowledge of Chess. These puzzles, of course, would have been a greater challenge had one of the patrols not had two state chess champions in towâ€¦

A few Detectives & Private Investigators found the Lounge quite appealing, possibly due to the ability to sit back and relax with a few classic games such as marbles and knucklebones. Alternatively, patrols could attempt to translate some ye olde English yarns, which only ended well after realizing they may be related to WWG North 2013 â€“ A Squireâ€™s Tale.

A manor canâ€™t exist without a Conservatory nor Ballroom. From avoiding swinging stingers in the conservatory to attempting to perform various dance steps. Leaders running this base were always left entertained, and to our knowledge, didnâ€™t become insane from attempted dancing!

The SC&T Rovers would once again like to extend a heartfelt thank you to all the Venturers and Rovers who attended the weekend.